I’ve been hard at work on a prototype for the concept I’ve outlined in my previous post. I’ve posted a work-in-progress version of the game concept here: 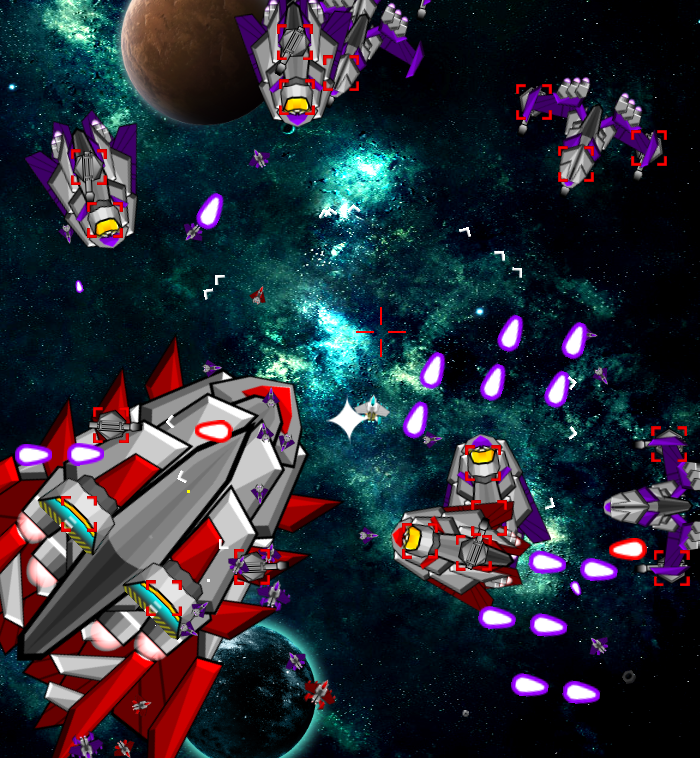 Check out my concept for a Space Game WOBA (watchable online battle arena). It’s like Gratuitous Space Battles but in a MOBA format. I’ll be using my Starling powered space game engine that I’m developing to implement this concept. 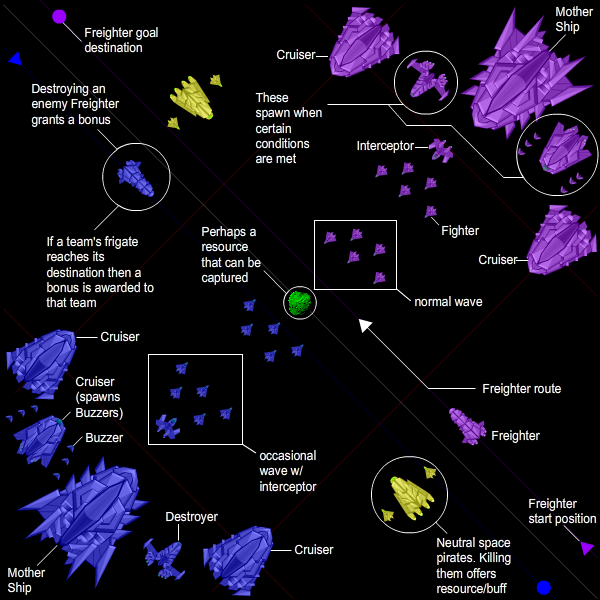 I’m still developing the core engine to support a space game. And this is just one game concept that I hope to apply my space game engine to. The idea for this game is that there are two evenly matched space fleets engaged in an epic space battle that ends when either Mother Ship is destroyed. However, it wouldn’t be all that interesting if both fleets were exactly the same, so ultimately the plan is to have “champion” ships which will bring variation to the battles (think of them like Champions in League of Legends) — henceforth they will be referred to as “Aces”. And similar to Gratuitous Space Battles, everything will be AI controlled. As for player input, the player may be involved with choosing the Ace composition and perhaps equipment loadout for the aces and ships.

An Ace is like a Fighter with added abilities. An Ace may fall into one of various classifications (e.g. Fighter, Support, Tank, Nuker, Assassin). And each fleet will have up to a certain number of Aces (somewhere between 3-5). The initial roster of Aces will be quite minimal but I’m hoping to create a framework that enables new Aces to be developed with ease.

Ultimately, this game is mostly a proof of concept that will allow me to demonstrate the space game engine as well as enable me to practice and showcase my game design skills.

As for other applications of the space game engine, I plan on using it to make an open world space exploration shooter game (like Omega Mega but without boundaries and you can shoot stuff). I haven’t settled on a particular design concept just yet, but I have enough of an idea to keep enhancing the core game engine to provide what I need.

Here’s an image of some ship concepts I’ve created for the space game I’m developing. I created these ships in Flash by creating a few reusable ship parts (like Lego pieces) and then arranging them in various configurations to get different kinds of ships. 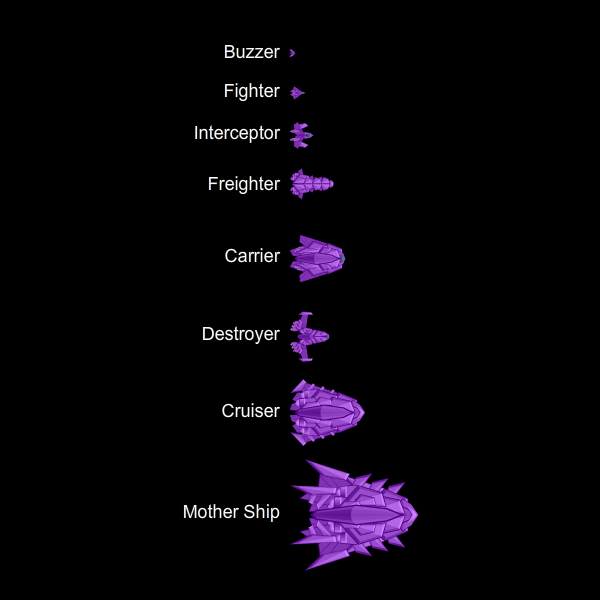 Making these ships gave me an idea for possibly having a “ship builder” component of the game where the user could use parts to construct their own ships. For now I’m focusing on the framework to get the space engine to work, but a nice feature to have would to be able to create your own ships.

Sorry for the lack of updates — I’ve been away at camp for the past year and nine months.

In August of 2011 I was presented with a great opportunity to work as a Software Engineer at Zynga in LA. Zynga is the company behind Words with Friends and Farmville etc and their HQ is in San Francisco. The ZLA studio was a relatively new addition to a growing number of satellite studios, each acting autonomously developing and maintaining their own games. What was so great about ZLA (aside from being commutable) was that the studio was filled with tons of talented people from the game industry, several of whom came from EA and worked on Command & Conquer prior to moving to Zynga.

While indie game development is great, there’s no one else around to challenge or question your decisions. This was going to be a chance for me to collaborate with and learn from professionals while making games… Facebook games.

To be honest, I’m not the biggest Facebook game player, and I wasn’t sure that developing a “Ville” game would interest me, but I took a chance and passed the series of interviews and was offered the position of Software Engineer which I then accepted.

So in September of 2011, I had an official deadline for completing Bowmaster Winter Storm, hence its release (the day before my first day at Zynga LA). Prior to working at Zynga, I was at Honda HQ working as a Flash Developer on technical training software for technicians and advisors at Honda dealerships. It was a tough decision to say goodbye to my friends at Honda in pursuit of advancing my professional career growth, and even more difficult to say goodbye (for a time) to indie game development.

Having never worked (officially) in the gaming biz I had no idea what to expect, and was a bit nervous considering past horror stories concerning work/life balance and crunch time. However, after the first few weeks I could tell this was going to be a great experience. I worked on Empire’s & Allies as it was already live when I arrived, and helped develop several content and feature releases per week (talk about hitting the ground running). And then a few months later I had the chance to help develop a new game called CoasterVille.

The culture was fun and the environment was a blast. The people were all very unique, fun and interesting. We all cared about our jobs, our games, and each other. It was one big happy, yet very functional, family. It was almost too good to be true. There were nerf fights, movie nights, lunches and dinners, and even trips to Disneyland and Universal Studios (research for CoasterVille). This is not to say that it was all fun and games. There was some crunch time and the occasional emergency hotfix, but it was still fun and exciting. And most importantly, the engineering problems and solutions presented through game development at Zynga LA provided several opportunities to learn and grow as an engineer. That was perhaps one of the most uplifting and eye opening experiences as a software development professional working in an engineering team — we were not designated by the tools we used or the computer languages we were most comfortable with, we were all simply “software engineers” whose job it was to solve software engineering problems.

Of course, we all had our particular strengths, and my foot-in-the-door was my expertise with Flash/Actionscript and my passion for developing games. But it was being valued as an engineer in general which was so refreshing.

I proved that I could thrive and did my best to add value to our games with every assignment given. Zynga prides itself as being a meritocracy and through the course of my stay I was recognized for my contributions and even “leveled-up” to a position with increased responsibility and expectations. This motivated me even further to work hard and keep up a “killing it” attitude.

As CoasterVille started winding down, the studio was leaning toward developing the next game which was going to be something in the mobile space. As engineers, we were about to dust off our knowledge of C++ and C# and were expected to become familiar with Unity3D. The engineering leads organized a few code-jams to help get people back into the swing of things, and as time allowed we were encouraged to experiment and develop with Unity3D.

This culture of learning and professionalism is one that I was most impressed with at Zynga LA. Sure we had nerf fights, and dressed casually, but we still practiced professional software development processes. We used SVN and build tools, had code reviews, had spec reviews, held software design meetings, were offered technical training, and created documentation, all the while interfacing and communicating with members from other teams such as production, design, and art.

Sadly, and abruptly, it all came to an end when Zynga Inc decided to close down three of its satellite studios (ZLA included) ultimately laying off 520 employees.

There was little warning and no chance to further reduce the JIRA bugs queue on the morning of June 3rd, 2013, when we were all told in person, by someone I’ve not had the pleasure of meeting until that day, that it was our last day in the studio.

It was a sad day for us all and it was truly unexpected for most as we were a very capable and well functioning studio. CoasterVille was third highest played among all of Zynga’s current Facebook games, and we still had a lot left to offer our users with planned features and pending content releases. I was not privy to the business details as to why it was decided to shut us down, but as they say, it’s all business, and I don’t take it personally.

At ZLA, we all cared about our games Empires & Allies and CoasterVille, and the numbers showed that our users liked them enough to endorse our studio with in-game purchases. These purchases were enough to keep our studio going and help carry the entire company through some rough times, and it was fun while it lasted

So here I am. Zynga is officially done with me and just in time for Summer! Time to hit the beach!…err.. I mean update my résumé.

So to recap… Recent Achievements Unlocked:

So what does it all mean?!

Well, I’m currently LFG and will be applying for new positions as a professional in an industry of some kind. I’m looking for both gaming and non-gaming opportunities in California in the LA and Orange County area.

As I look for a new full time job, I’ll be working on some new and exciting personal projects which I will describe in later posts so stay tuned. Below is a teaser image of a space game I started developing now that I have more free time. I’ll be using the Starling Framework (used by Angry Birds for their Facebook version). 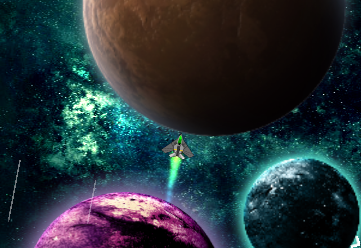 What’s great about Starling is that it enables Flash to tap into your GPU to provide improved performance and graphics. Imagine my space sim game running at 60fps with cool particle effects. That’s the hope at least. We’ll see what I can come up with.

I may also update Bowmaster Winter Storm with new content.